Trending News on Alledged Sexual Assualts by Celebrities may make voyeurs of us all. But will we learn enough from those mistakes to break the cycle of abuse?

It is past time men and women should be educated properly on the trending news about SEXUAL ASSUALT. This post will share my opinion; some links to better inform victims and families that there are safe places to turn to when no one seems to be listening. The first Rape Crisis did not open until 1970.

Boy wiil boys is not a valid excuse. No means NO. 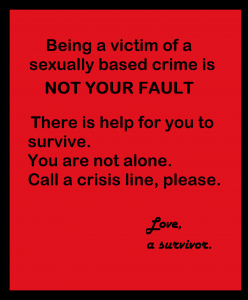 Sexaul harasement, unwanted touching, molestation of children, rapes are crimes. There is help for victims. Please call a crisis line to figure out how to be safe. Educate yourself and stay safe. Yu are not alone

There was a time when men, women and children were told to keep silent. Boys and men may be victims too. It is time to end the cycle!

In generations past there was such a lack of education the wrongful power and control acts was never dealt with. Often times there was fear that telling about the hurt of molestation, rape and sexaul harrasment would destroy families. But, the truth is  those families were already destroyed with the FIRST wrongful touching and threats.

Shameful secrets were kept when it WAS NEVER OUR FAULT! Way back when before better laws and councelors were trained, we victims really did not have a choice. The Menendez Brothers circus trial opened Pandora’s Box on molestation of children and the heinous acts of parents that no one dared speak of.

As a grown woman, a surivor, I know now what I did not know when I was 2, 3, 4, 5, 6…11. The ONLY reason I know that I can write or talk about sexual assualt is because I educated myself. At the time that I was reading for healing there was becoming more and more professional material available than ever before on the impact on victims of sexualy based crimes.

Keep in mind, that often times the loudest pooh-poohers of accusers claims may be hiding somethings themselves. The more we talk about legal action the clearer the message is that the predators will be caught and stopped.

I am so sorry people are being assuaIted and mistreated. With that sincere grief I have to say that I am aghast that so many grown women are waiting years to report the sexual assualt on them by a celebrity. Sexually based crimes and sexual harrassmetntmust stop dead in its tracks the first time and not allowed to continue for years and years.

Why are these actions not stopped by coorperate employeers?

By keeping quiet, the prepretator is free to continue his crimes against another victim. The more he/she practices the wrongful acts the more sofisticated the bold an heinous the acts becomes. Speaking up can save some one from being the next victim(s). Your cry for help can help validate another’s case being investigated by police and then in court. ( Perpetrators are not limited to men. Women sexually assault as well.)

I am appalled that so much new media is conviting an alleged perpretrator in the new BEFORE they have a full investigation and a legal fair trial.

Every one is presumed innocent until proven guilty.

The court process for victims victimizes the victims over again., but there can be closure and way to seek healing. Being a witness is horrendous as well. Proving guilt can be difficult. No one wants to jail any one if they did nothing wrong.

The new must be held accountable for their news stories. Celebrities are not exempt from miss-uing power and control.

Let me tell you, no one wants the guilty to go free on a techincality nor a mistrial. We want the accused to get what they deserve the first time around at trial.

In my training I learned that it is important to allow the victim to make their own statements. When talking to children, There a critical techniques in the professional interview. An adult should never prompt a child on what to say about what happened. Just listen and call for professional help.

I am personally appreciative of the efforts of Rape Victim Advocay of the Universtiy of Iowa. The link below will give you a good idea of things we can do to END this madness.

This helps creates a path towards healing and justice. Positive reactions can influence survivors to reach out to others and create a supportive network necessary for healing. A negative response can worsen the effects of sexual trauma and allow perpetrators to live consequence-free.

The Mental Health Impact of Rape

Crisis Hotline – Whether someone was assaulted 20 years or 20 minutes ago, she or he can call and get help 24 hours a day, seven days a week. Victims and/or concerned loved ones can call to speak with a caring, supportive advocate.

In Person Crisis Intervention & Advocacy Services – Available on a walk-in basis 9 am to 5 pm, Monday through Friday at our offices located at 1723 Hemphill Street, Fort Worth, Texas

No one has to face sexual assault alone. Here’s where to get additional help:

Tags: Alledged Sexual Assualts by Celebrities the Trending News, can sexual abusers be stopped?, how to find help crisis intervention, molestation, no means no, power and control, rape and sexaul harrasment destroy families, resources for help when sexualy assualted, sexual abuse victims PTSD help, Sexual assault, The U.S. Census Bureau, why should I tell what happened to me to the police