As, I am finishing up dramatic play pirate costumes, I am very hesitant about missing sales over the pirate hooks and peg legs we tend to associate with the pirate party themes.

Why? Because the loss of limb is not fun. I never want children to get the wrong ideas about disabilities. 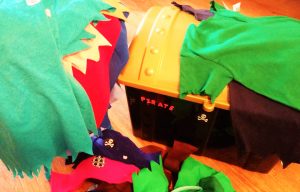 Dramatic play and dress up or playing the part of a character are different matters from real life where our love ones may have lots an arm, a leg or an eye. We want to be sensitive to their needs and feelings.

A tragic accident can happen to any one of us or our children.

Perhaps a dramatic play costume is an opportunity for we parents,grand parents and caregivers to talk about safety/  caring for our bodies. this may be the time to start a conversation about disabilities and the many possible reasons how they might happen.

A person who has an arm or a leg amputated does not mean that they are a bad like a pirate character. 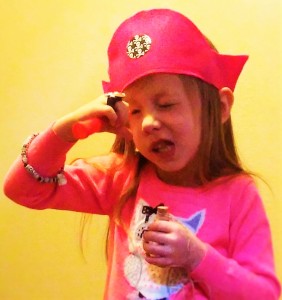 Arg! She spies some buried treasure with her tiny telescope.

In decades past our parents and grand parents did not speak of someone’s “malady” . Sure, we kids had questions, but, were not aloud to ask. I realized later when I was as student nurse that grown ups were the ones afraid to ask out of fear of the unknown. *”Handi-caps” were not taken out in public nor allowed to go to regular school. People feared catching disease or evil spirits from others.

Points to ponder abut peg – legged pirates with hooks and patches versus disabilities. 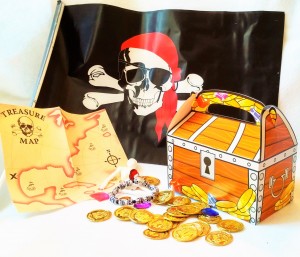 Heart Felt Play Store will not be selling pirate hooks.I doubt I will sell swords to poke eyes out either. ( Not funny) I w.ll make “weapons” from pool noodles as they make good exercise.There is a time and a place for weapons that each parent will need to discuss with their children.

Check out All Pirates, Castles and Hidden Treasures collection in the heart Felt Play store Catalog.

I have to confess, that as the owner of Heart Felt Play Store I do have eye patch for sale.

I can’t seem to draw decent skull and cross bones for the pirate look. so, I buy stickers and eyes patches.I do have a request for kids who want the eye patches: In the future I will buy the new trend with eye patch with a hole so the eye can see. I may eventually cut holes out with my exact o knife.

This statement is my opinion as the owner of Heart Felt Play Store in Colorado Springs Colorado. 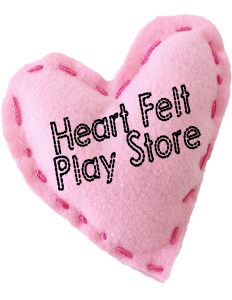 I would love to hear your thoughts:

Does this make sense to you? I love to hear your opinion. do you think I should re-word anything?