I wanted to publish a few thoughts for the future about the day that brought America together for a moment: August 21, 2017 The Eclipse of 2017.

I had walked to the post office to mail Heart Felt Play Store order #1050. I bought Eclipse stamps. It was hot and muggy on this August 21th day. 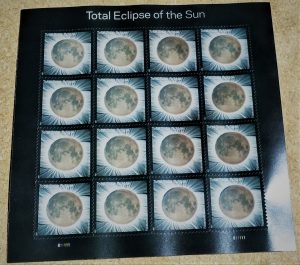 I hope it is legal to photograph USPS stamps. I got a set of the Eclipse Stamps for a collectors item to pass on to one of the grandkids.

Amber Service-Dog-in-Training was antsy tho’ I had taken her outside 4 or 5 times already, I put her in her kennel when a delivery man knocked on the door …he rushed off to see the sight outside after dropping the small package.

I had to order from Dominoes. About the time our delivery arrived my neighbors were outside with special glassed that I did not have. The delivery guy was grateful to have the opportunity to be outside. I wanted to take a picture as did the pizza driver, but we did not want to ruin our camera phones.

My son’s wheechair was broken down, AGAIN, so he was in bed waiting for the repairman, answering phone call from either phone solicotors and appointment reminders.

Around Noon to 1:00 it felt weird ouside. When I went out I had to put a jacket on. I held my hand over my eyes to try to squint through the cracks of fingers. OUCH! The glare on my fingers was bright refection! I hope I did not burn my retinas.

In Colorado we did not see that much of the eclipse as in other places, but we share an historic moment. And since David, my son was stuck in bed we watched TV. I video taped NBC and hope my clip in my son’ room is legal to share on-ine. If I have to take it down, oh well. My grand chidren and great grand children will able to see what I was doing on this day in history.