Dinosuars names may be so hard to pronouce and spell, unless you are a kid.

Children are inspired to when they play with dinosuar stuff like these dinosaur skeletons.

This post shares a few simple games and finger plays PLUS Dinosaur DIg Pinterest boards which has the links to over 1,000 dinosaur ideas. 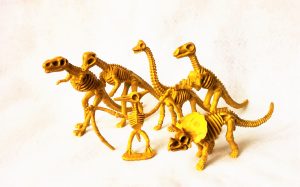 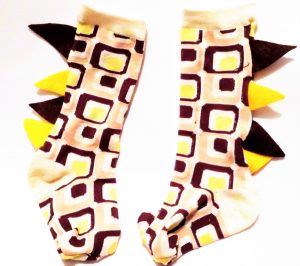 Tell kid to get dressed in their dinosaur socks to escape the “hot lava” . Most dawdelers will dress faster than pre-historic dinosaurs ever moved so they can get into the game.

This old No Non-cents Nanna has always found the fact that kid who who won’t eat brocoli until someone says that dinosaurs eat brocoli.

Then brocoli becomes a favorite food. 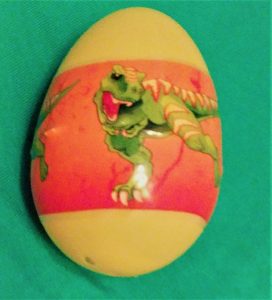 One went away and then there were four.

One went away and then there were three.

Three enormous dinosaurs didn’t know what to do,

One went away and then there were two.

One went away and then there was one.

One enormous dinosaur afraid to be a hero,

He (she) went away and then there were zero. 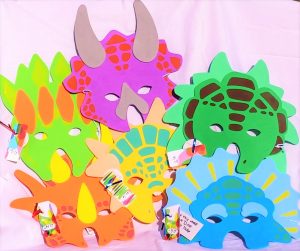 ( This finger play ends with the word zero which is as important a number as 1, 2, or 3…)
Dinosaurs Stomp!

Some walked (stomp in place)

Some swam (pretend to swim)

Some flew, you know! (flap arms at sides)

Some were big (hold hands high)

Some were small (hold hands low)

Some were gigantic–(stretch arms out wide)

This is great for using large motor muscles in a fun way for kids.

Note from No Non-cents Nanna:

Pre-school kids couldn’t wait to do the DINOSAUR unit in my classes.

I involved the kids in the process of building a volcano starting with tearing up newspaper.

On the last day I promised that the volcano would erupt in Dinosaur Land.

My secret ingredients were vinegar and baking soda.( You know about that chemical reaction, right?)

One child got to pour baking soda into the volcano with great anticipation, but nothing happened.

The kids scream with delight as I looked so shocked when I ask, “What did you DO_O_O_O?!”

My dinosuar unit was alway so much fun when I taught pre-school.

Share the lyrics to your favorite dinosuar finger play.

Are you following No Non-cents Nanna on Pinterest, yet? I have a Pinteresting collection of dinosuar fun.

I am Malika Bourne the No Non-cents Nanna encouraging you to make good choices!